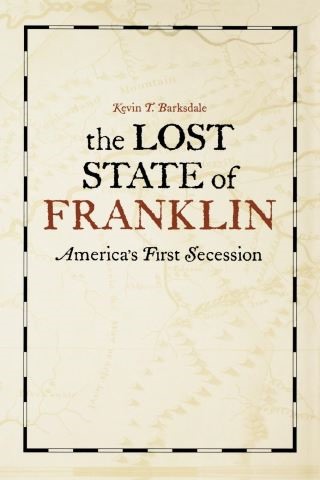 The Lost State of Franklin

In the years following the Revolutionary War, the young American nation was in a state of chaos. Citizens pleaded with government leaders to reorganize local infrastructures and heighten regulations, but economic turmoil, Native American warfare, and political unrest persisted. By 1784, one group of North Carolina frontiersmen could no longer stand the unresponsiveness of state leaders to their growing demands. This ambitious coalition of Tennessee Valley citizens declared their region independent from North Carolina, forming the state of Franklin.

The Lost State of Franklin: America's First Secession chronicles the history of this ill-fated movement from its origins in the early settlement of East Tennessee to its eventual violent demise. Author Kevin T. Barksdale investigates how this lost state failed so ruinously, examining its history and tracing the development of its modern mythology. The Franklin independence movement emerged from the shared desires of a powerful group of landed elite, yeoman farmers, and country merchants. Over the course of four years they managed to develop a functioning state government, court system, and backcountry bureaucracy.

Cloaking their motives in the rhetoric of the American Revolution, the Franklinites aimed to defend their land claims, expand their economy, and eradicate the area's Native American population. They sought admission into the union as America's fourteenth state, but their secession never garnered support from outside the Tennessee Valley. Confronted by Native American resistance and the opposition of the North Carolina government, the state of Franklin incited a firestorm of partisan and Indian violence. Despite a brief diplomatic flirtation with the nation of Spain during the state's final days, the state was never able to recover from the warfare, and Franklin collapsed in 1788.

East Tennesseans now regard the lost state of Franklin as a symbol of rugged individualism and regional exceptionalism, but outside the region the movement has been largely forgotten. The Lost State of Franklin presents the complete history of this defiant secession and examines the formation of its romanticized local legacy. In reevaluating this complex political movement, Barksdale sheds light on a remarkable Appalachian insurrection and reminds readers of the extraordinary, fragile nature of America's young independence.